A couple days ago I attended the "Transit Caucus" get-together during the annual conference of the Transportation Research Board. This conference - which usually takes place in Washington, D.C. - is one of the biggest transportation conferences out there, and is known for featuring a strong mix of government, industry, and academic participants, with research on all aspects of transportation.

The Transit Caucus is about - you guessed it - transit. To facilitate conversation and to gauge the general feeling from industry leaders and experts on the post-pandemic future of transit, we took a rough poll of the room, asking at what point they felt transit would return to 90% of its pre-pandemic numbers. 41 people voted. Here are the results: 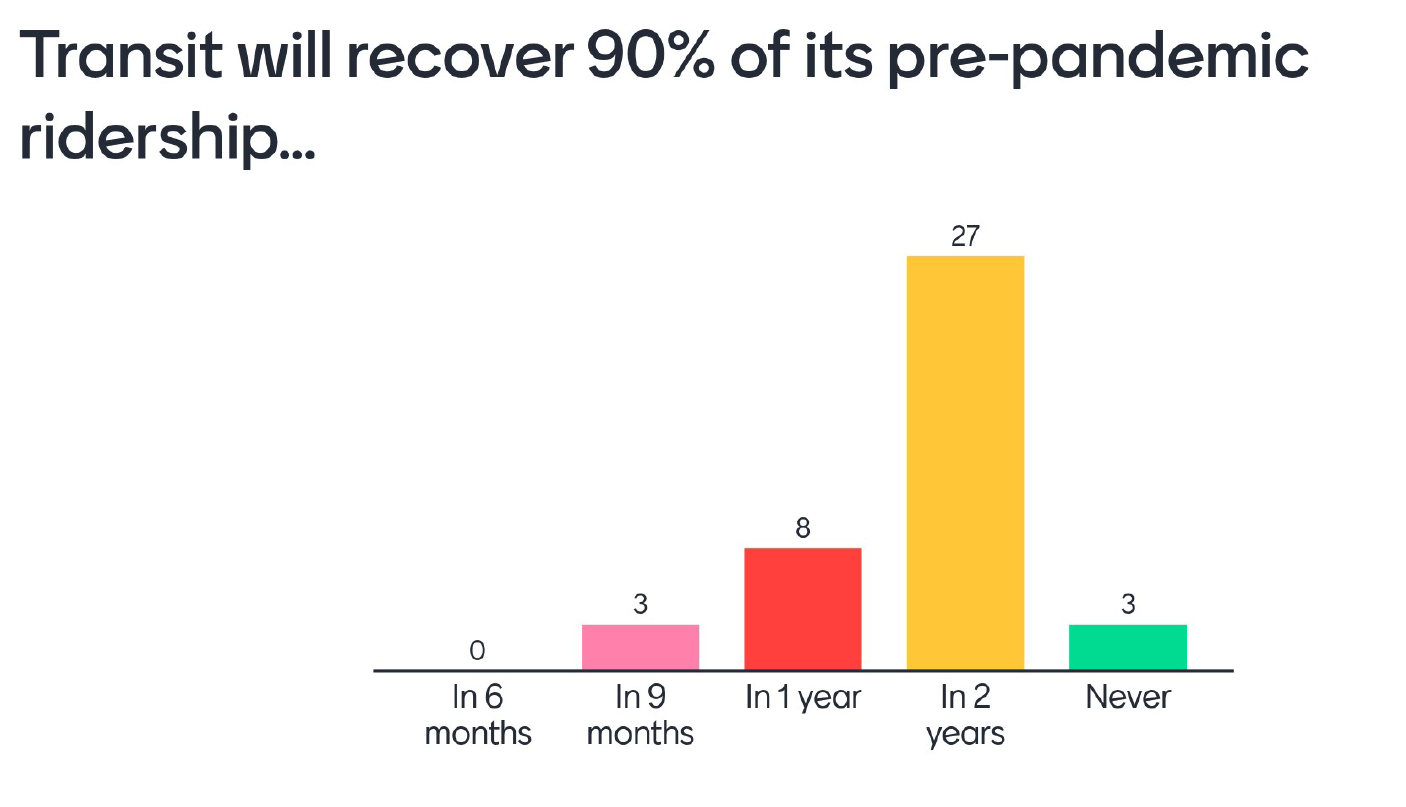 A quick poll to gague optimism on transit ridership.

Based on the discussion and feedback that followed, it was clear that many who voted for the 2-year option felt that transit recovery would come, but would take a little longer; roughly 3-5 years. Still, the large majority of the Zoom-room felt strongly that transit would - one way or another - bounce back in the short to medium term.

This optimism is well-informed, and is directly in opposition to the major thrust of the anti-transit arguments that circulate about how transit will never recover from the pandemic.

I want to unpack this result a bit, and offer some explanation as to why those in the transit industry may feel the way they do.

Let's start with the short term: It was pretty clear from the results and the following discussion that a widely distributed vaccine is critical before ridership can be expected to bounce back. It's not entirely clear exactly how risky riding transit is for catching or spreading COVID-19, but it appears the early fear around mass transit and coronavirus may have been somewhat unjustified. Nevertheless, public perception is public perception, and it is going to take a major drop in cases and widespread vaccine uptake before the stigma around public transit and coronavirus dies down. Even the most pessimistic estimates suggest we'll reach that point within the next 2 years.

The "everyone works from home" fallacy

Restoring trust in the system is important in the short term. But what about long-term changes in travel? Won't everyone work from home?

Not necessarily. There are three reasons why this argument is misleading:

Even setting aside these demand considerations, there's another transit-specific reason for optimism: the flattening of the commuter peak. Here's a great snapshot of TransitApp data published in May, 2020 that captures the issue perfectly:

Trip requests over the course of the day, pre and mid pandemic. What will post-pandemic look like?

For a long time, transportation systems have been designed around these "camel humps", big spikes in activity that create lots of transit trips in the morning and evening rush. This is where the capacity of the transportation system is pushed to its maximum: roads get congested, parking is limited, and transit gets more appealing for commuters as a result.

During the pandemic, these commuters are exactly the people who are able to work from home, and the people most likely to continue working from home once the pandemic is over. This may lead to a "flattening" of the curve, with less trips in the morning and evening peak hours.

Sounds bad, right? Not so fast.

The trick is that peak-only transit is very inefficient for a few reasons. Short shifts are expensive (and sometimes prohibited in labour contracts), as you have to pay a minimum number of hours, which is usually more than the length of the peak period. Peak periods also have a lot of one-way travel (into the core in the morning, out of the core in the evening), meaning that the return trips are running mostly empty in the reverse-peak direction. Peak capacity also typically determines how many vehicles the transit agency needs to own. Having these vehicles sit idle in the off-peak hours is not cost-effective either.

This means that a flattened demand curve, where transit use is relatively consistent throughout the day, can really work in transit's favour. If resources are allocated more efficiently, the transit system can serve more diverse trips across the city, with buses coming more often. More frequent service - more than anything else - drives up ridership.

Reconfiguring for the "new normal"

From the conversation in the room, my take on the results is that there is confidence that riderhsip will return in the next 1-5 years. How long it takes and what it looks like will depend on how quickly transit systems adjust for the flattening of the peak, and how well they take advantage of changes in demand patterns. With many transit systems, this will take time and a willingness to change. But it will happen.

The geometry of cities hasn't changed. We will still want to live and interact together once it is safe to do so. Cities are places where ideas are exchanged, skills are diversified, and specialization is sustainable. Bringing people together means that we need to move around in a space efficient way. This is the value that transit offers a city, and that value hasn't changed.

As for myself, I chose one year. What can I say? I am an optimist. A vaccinated population, starved for human interaction, is going to want to visit friends, see a comedy show, and have a pint at the pub.

And transit will get them there.