Note: This post is the first in a new series that I'm calling "five-minute findings". The goal is to assemble some interesting recent studies on a transportation topic, give you the gist of what they're saying, and keep the reading time to under five minutes. You can see a list of five minute findings articles here (once they are written!).

It is crucial... that governments at every level support the expansion and improvements in cycling infrastructure, programmes, and policies necessary to ensure that cycling thrives.
Buehler and Pucher, 2021

The Covid-19 pandemic has led to an increase in cycling in many countries around the world. In Canada and the United States this increase is mainy borne out in weekend trips, though both countries have seen increases in weekday cycling on average (despite a decrease in commuting trips during the pandemic). Here's a rough breakdown of how cycling popularity changed between 2019 and 2020. 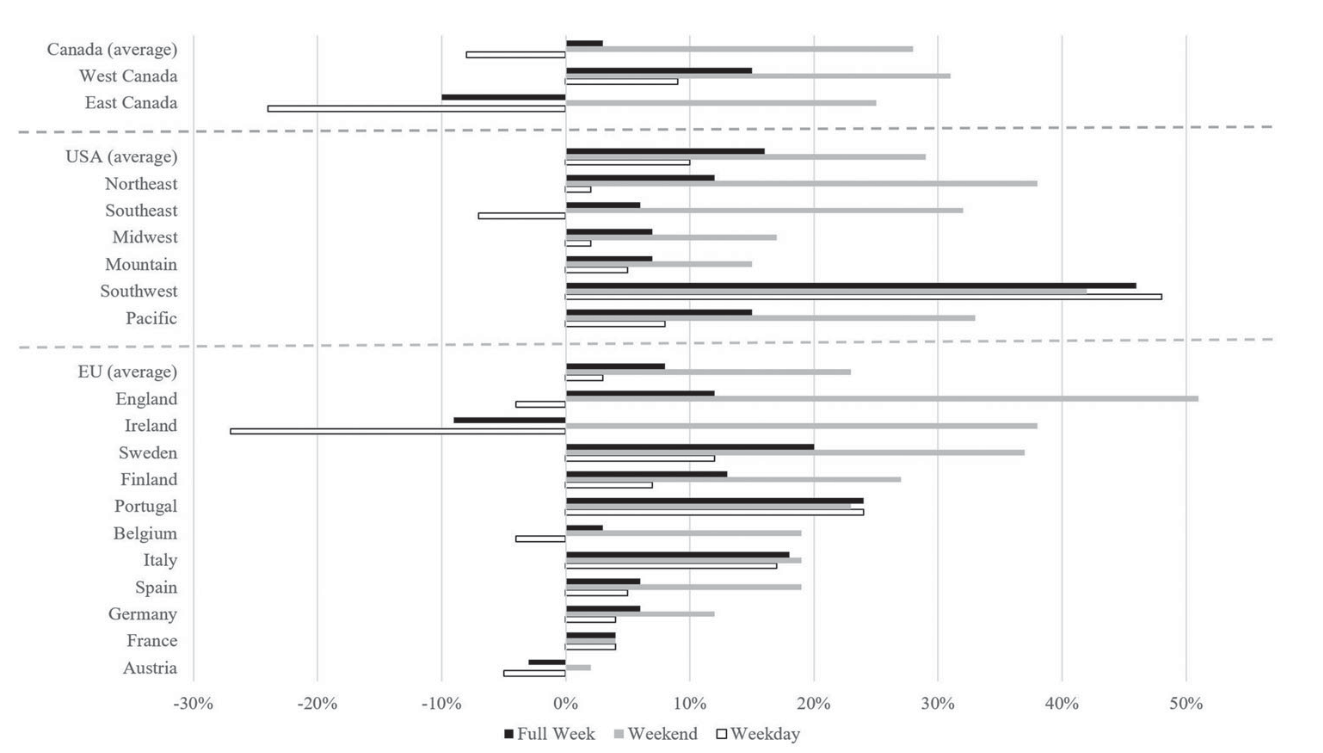 There are a number of reasons given for this change by the authors of the chart above: Better cycling infrastructure, more people owning bikes, and a shift away from using crowded public transit. If we put these factors together into a cohesive narrative, it is this: Covid-19 encouraged more people to try cycling (or try it again). Recent infrastructure improvements made cycling more pleasant, leading people to make a more permanent switch.

In this quick look at recent literature, I'm going to touch on a couple of key topics: Safe infrastructure and cycling use, the importance of complete networks, and some lessons about getting it built in difficult political environments.

Increased bicycling uptake directly benefits the environment and public health and contributes to congestion reduction, but in the longer term, it may also contribute to creating more acceptance and a stronger bicycling culture across urban and suburban neighbourhoods.
Mitra et al., 2021

There is a growing body of evidence that building safe and accessible cycling infrastructure results in more cycling trips. In Lisbon, Portugal, researchers studied the results of a major change in the city centre's built environment between 2017 and 2018 that included the introduction of a bike share system. They saw the overall volume of cyclists nearly double, increases in the share of women cyclists, and a strong connection between bike share locations and cycling use. In Toronto, researchers found via a survey of 17 neighbourhoods that streets with a cycling facility correlated with higher odds of commute-related cycling, and that occasional cyclists "are likely to bicycle more frequently after new facilities are built." 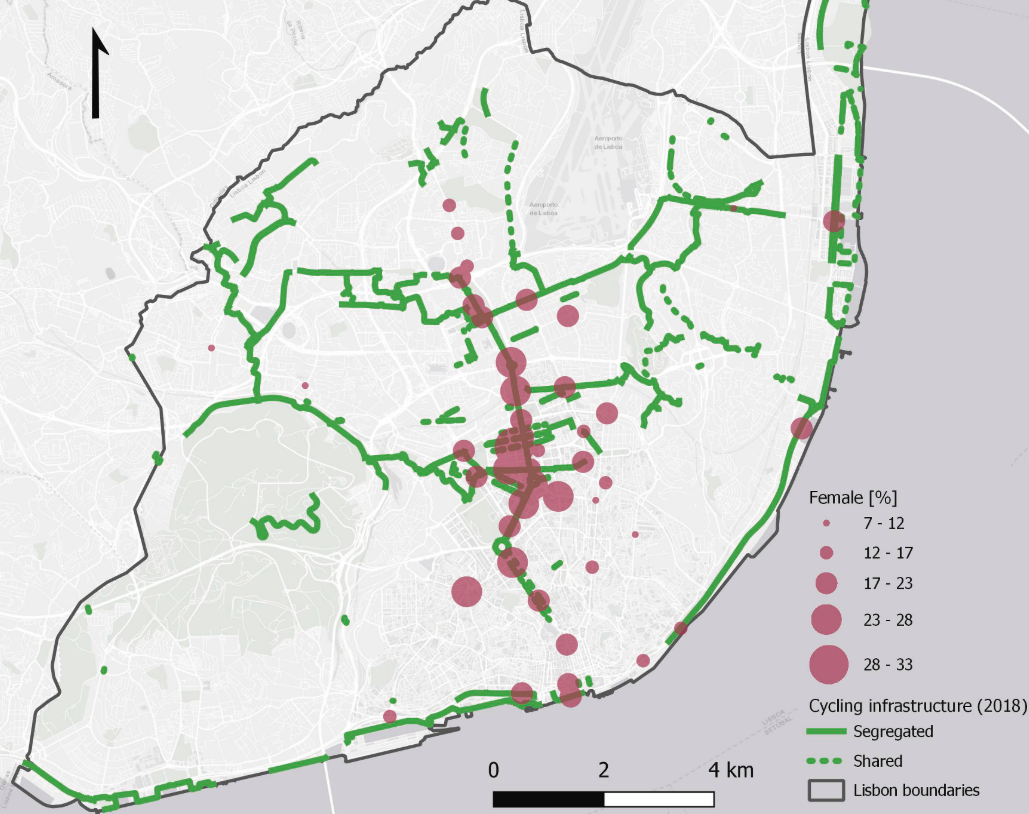 A map of Lisbon showing the share of observed female cyclists and the cycling infrastructure network. From Félix et al., 2020.

A large part of the appeal of dedicated and segregated cycling infrastructure is the safety it provides. In Glasgow, reserachers used data from Strava to examine non-commute cycling during various goverment responses to the Covid-19 pandemic. As streets became less busy with traffic, more cyclists used them, suggesting that safety is a key barrier to regular use of these routes. In Ottawa, Canada, researchers adjusted accident data using Strava to estimate cyclists' exposure to risk. They found that after accounting for volume, risk hotspots concentrated around commercial streets with no dedicated infrastructure.

Given the importance of safe infrastructure, a lack of a complete and connected network can vastly limit the range and opportunites that cyclists can access if they are not comfortable with on-street riding. A 2019 analysis of the cycling network in Toronto classified routes based on the level of stress a user might experience. The authors found that a low level of stress tolerance significantly limited the number of jobs that a rider could reach from their home. In a similar vein, a study looking at San Diego County found that "almost 70% of utilitarian trips included high stress segments." Low stress alternatives averaged 74% longer than the shortest possible path. 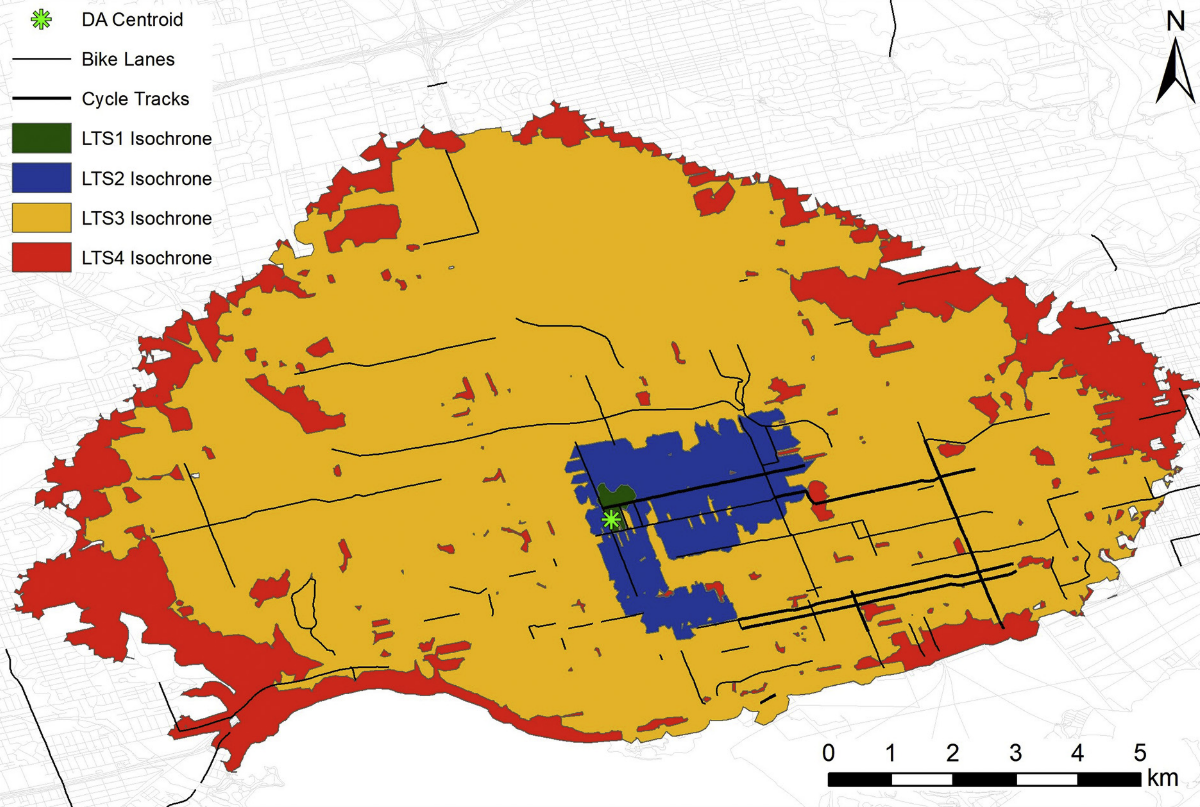 A map of Toronto showing a number of isochrones, or areas that are reachable from the origin star by bike depending on the level of stress you are willing to tolerate. From Ahmadreza et al., 2019.

it is not the physical presence of the cycling infrastructure, nor its social and political representations, but rather automobile that is political, and a battle for (road)space against it remains and may continue to remain a major policy and professional challenge.
Wilson and Mitra, 2020

Despite the connection between cycling infrastructure and increased cycling use, safety, and comfort, actually building bike infrastructure can be a conentious prospect. A 2018 paper identified "four key sources of organized opposition to bike lanes: retailers; conservative voters; residents opposed to gentrification; and disaffected cyclists". In the face of this so-called "bikelash", the authors argue for approaches that encourage grassroots community support and engagement that treats local residents as potentially useful sources of insight and improvement. In some cases, success comes from slowing down and engaging "rather than jumping straight to a 'build it and they will come' phase of infrastructure rollout".

It's not news that cycling can be a safe, high-capacity, zero-emissions method of getting around a city, and that dedicated cycling infrastructure can encourage more biking result in safer trips. These studies, all done within the past two years, capture the imporance of complete networks, segregated bikeways, and the importance of community engagement in getting support for projects.

Space is necessarily limited in cities. For us to benefit from living close together, we need space to get around, and that space is scarce. Although bikes take up far less room than automobiles, much of the conversation around cycling infrastructure is rooted in taking space away from the automobile, instead of talking about the efficient use of space that these improvements provide.